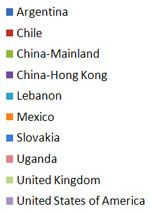 Bar chart (above) of isolation expressed by students attending universities in participating countries. The numbers represent relative weights for each country. Click on chart to go to full graphic comparing all emotions.

Is anybody there?: Many students experienced feelings of loneliness and isolation. They were not able to contact people who lived close by or those who lived faraway.  Students also vociferously complained of not being able to engage in media-related activities with friends, such as watching TV in the dorm or listening to music in the car.

Painful loneliness: Perhaps most disturbing, however, was that many students came to recognize the extent of their isolation even during the days when they were able to use media. For many, their ‘virtual’ relationships with media had been substituting for real connections to others.

“I don’t feel like I’m just sitting alone in my room if I’m watching TV.” — UK


Good to see your face: The ‘digital’ isolation that most students felt prompted some to actively seek out friends and family. Without being able to rely on media to communicate, they had to make an effort to see people in person.  Yet because the students couldn’t fall back on familiar plans such as going to the movies, they reported that they convinced friends to take walks or to go out to eat.

Students observed that when they went unplugged they used time differently:  not every second was filled with texting or updating their Facebook status.  A few students thoughtfully noted the luxury of having uninterrupted ‘time’ to be with friends, and came to recognize the value of rambling conversations.

“I visited my grandparents. They were surprised, but really pleased. Instead of watching TV with my boyfriend we went for a walk and we liked it.” — Slovakia