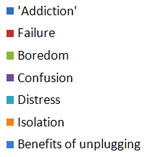 Bar chart (above) of emotions expressed by students attending university in Lebanon. Click on chart to go to full graphic comparing all countries. 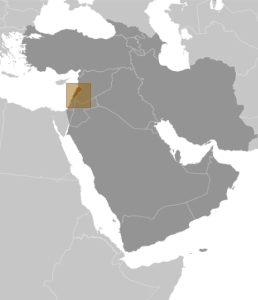 “When I came back to the dorms I saw the vending machine in front of me but in my head it was like: ‘I can’t eat from it.’ But then I remembered that I was only deprived from media, not food! So I concluded the fact that media has a big impact on me – to the extent that I felt like I was fasting.”

I think I’m addicted!: Students reported that they desperately missed their Blackberrys and iPhones.  Students wrote that having to stay off the Internet, especially for homework assignments, was challenging, but with some advanced planning they could time-shift their projects.  Not so their plans to rendezvous with friends, to call home and relieve their parents about their whereabouts.  But even beyond the communication needs, students admitted that they just physically missed holding – and hearing – their phones.

Minor annoyances: Like many of their counterparts from around the world, students based in Lebanon frequently mentioned how difficult it was to survive a day without any form of media. It was the petty things that drove students in Lebanon crazy: not being able to film “a hilarious scene with two kittens,” not being able to sing along with the car radio, having to write a paper longhand and use a dictionary to look up words.

“What really bothered me and made me feel ‘tied down’ was the inability to do what I wanted, when I wanted it.”

Socially Disconnected: Students based in Lebanon spoke about being surrounded by media – on the street, at the university, at home.  And the ubiquity of media perversely made students feel more alone during their day unplugged; they felt “dis-attached,” as one student wrote:  as if they had been intentionally excluded from the society around them.

LOTS more productive: A majority of students, even those who found going media-free challenging or impossible, reported that on balance they had found the experiment to be both a healthy one and an enlightening one.  Students wrote about being more productive, having more energy, connecting with more people.  And they also wrote about learning that they should set some limits to how they use media, even if they can’t do without it.