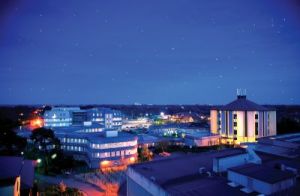 Bournemouth, England: Students from the Media School at Bournemouth University participated in ‘the world Unplugged‘ experiment, led by Dr. Roman Gerodimos, a Senior Lecturer in Global Current Affairs at the Media School and a faculty member of the 2010 Salzburg Academy on Media & Global Change in Salzburg, Austria.  Shelley Thompson, a Postgraduate researcher in the Media School, assisted Dr. Gerodimos.

When the Bournemouth students were first told of the assignment, noted Dr. Gerodimos, they felt it would be well-nigh impossible to go 24 hours without using media, though Dr. Gerodimos told the classes that accepting the challenge and recording their reactions was the paramount goal of the study.  After completion of the experiment, Dr. Gerodimos observed that many students felt their participation was worthwhile.  According to Gerodimos, “Many students noted that they found the experiment invaluable in encouraging them to reflect on their relationship with media as well as the media’s role in society.  In particular, it was fascinating how not having access to media forced participants to abandon the isolated space of their bedrooms/homes and engage in physical activities or social interactions with real people in real places, as well as pay attention to their surroundings (sounds and sights of the natural environment and the city), none of which would be part of their daily routine.”

In the news in Europe: The BBC provided extensive coverage of the Unplugged experiment on television, on radio and online. The BBC’s Technology Correspondent, Rory Cellan-Jones, visited Bournemouth University (BU) on October 20, 2010. He interviewed Dr. Roman Gerodimos and “shadowed” three of the students taking part in the experiment throughout the day. Reflecting on his interaction with student participants, Mr Cellan-Jones said:

“They live in an age where everything is conducted on the fly with these new forms of technology and it’s going to be really hard for them. We’ve been seeing that already – just arranging to meet them is pretty complicated! So I think it’s a very useful experiment but it also highlights how addicted we can become to these forms of technology.”

Mr. Cellan-Jones’ package was broadcast on October 22, 2010 on BBC 1, BBC News 24, BBC America and BBC World. The BBC devoted its main homepage to the Unplugged story that day, and once posted, the video became the most watched on the BBC News website.

Following the completion of the study and the collation of preliminary findings, the Sunday Telegraph’s Science Correspondent, Richard Gray, visited BU and interviewed Dr. Gerodimos. The subsequent article was published on January 2, 2011. German public service broadcaster ZDF also visited BU and spoke to the researchers and students involved with the study. The package was broadcast on ZDF’s Heute Nacht evening news programme on 20 January 2011.

University background: Bournemouth University has a student population of about 18,000 students.  It is a suburban university primarily located in the towns of Bournemouth and Poole,  on the southern coast of England.  The student body is largely middle class and homogeneous, with a large majority of students coming from Southern England.  The university is wired, and students actively use multimedia in their coursework and social lives.

Students’ experience: Of the 400 students invited to participate in the study, 128 students from two different classes volunteered.  Those students who did participate in the UNPLUGGED experiment did so from October 18 to October 31. This time frame was chosen because most of the participants in the study were first-year students, so it seemed appropriate to perform the study a few weeks after the start of the semester, allowing students time to become acclimated with college life prior to their media fasts.