“It was rather interesting to watch how people in my neighborhood reacted when I told them that I would be all day without media. They shook their heads and laughed.” — Slovakia 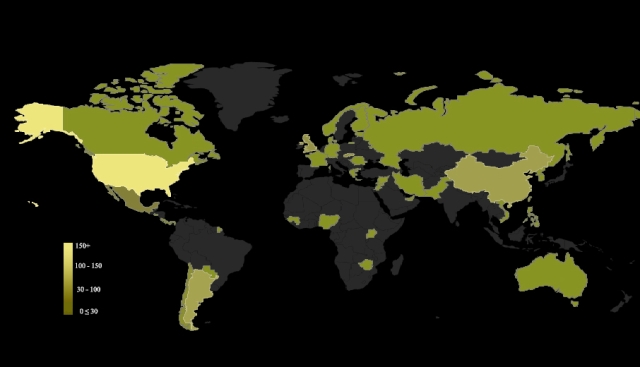 Students in this study came from a dozen different universities on 5 continents. This map identifies the 37 home countries of those students. Click to open up a larger version.

Digital natives have no passports: What’s the major takeaway of this study, looking at the data by country of origin? That if you were to cover up the place name of a comment, you would be unable to discern the nationality of the author. Rather strikingly, all the student-responders in this study are digital natives. Taken as country-based groups, the students in the aggregate reacted almost identically to going without media for 24 hours.

Click on the tabs above or the links below to explore the specific reactions of students in the 10 countries that participated in this Unplugged experiment:

Comparison chart of emotional response: The chart below gives an overview of the emotional responses recorded by the students from all the countries in this Unplugged study. Click on the chart to open up a full-screen version. The percentages assigned to the different emotional responses were derived from both hand and computer coding (using IBM’s ManyEyes software) of a range of keywords identified by the researchers.

Bar chart (above) of emotions expressed by students attending university in participating countries.

While the values of the different color bands show some variations, two main factors make it difficult to read too much into the actual percentages: the significantly different population sizes from the various universities and the variability of the coding.

Even though the entire data set of almost half a million words was coded twice, by two sets of researchers, with each country’s reports being read and coded by at least two people, the assignment of “emotional category” to a particular word choice remains a somewhat subjective evaluation, especially when working with comments that have been translated. Therefore a comparison of percentages across countries that show variations of even as much as 10 percentage points may only be indicative of differences.